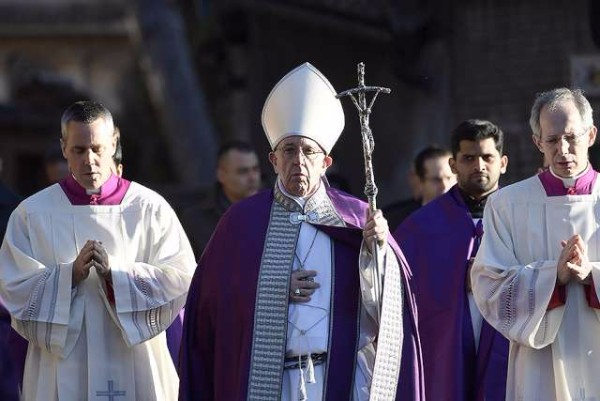 Pope Francis has a special message this Lent, and here it is

In his message for Lent 2017, Pope Francis reminded the faithful that they should heed the Scriptures and treat each human person they encounter as a gift.

“Lent is the favorable season for renewing our encounter with Christ, living in his word, in the sacraments and in our neighbor,” he said. “May the Holy Spirit lead us on a true journey of conversion, so that we can rediscover the gift of God’s word, be purified of the sin that blinds us, and serve Christ present in our brothers and sisters in need.”

Scripture is also a gift, the Pope said in his message, which was released last October to help Catholics across the globe prepare for the 2017 Lenten season.

In his message, Pope Francis reflected on the parable of the rich man and Lazarus. In that story, a poor man named Lazarus lives on the doorstep of a wealthy man who ignores him. When they die, Lazarus rests in paradise, while the rich man suffers.

Although Lazarus is “practically invisible to the rich man,” Pope Francis said, we should see him as a concrete person, whom God views as a priceless treasure.

“Lazarus teaches us that other persons are a gift,” the pontiff said. “A right relationship with people consists in gratefully recognizing their value. Even the poor person at the door of the rich is not a nuisance, but a summons to conversion and to change.”

In this way, the parable invites us to see each person as a blessing, he said, and Lent is a particularly fitting time to open our door to all those in need and the face of Christ in them.

“Each life that we encounter is a gift deserving acceptance, respect and love. The word of God helps us to open our eyes to welcome and love life, especially when it is weak and vulnerable.”

Another important lesson from the parable is how sin can blind us, Pope Francis said. He pointed to the rich man’s ostentatious displays of wealth, saying, “In him we can catch a dramatic glimpse of the corruption of sin, which progresses in three successive stages: love of money, vanity and pride.”

“Money can come to dominate us, even to the point of becoming a tyrannical idol,” the Pope warned. “Instead of being an instrument at our service for doing good and showing solidarity towards others, money can chain us and the entire world to a selfish logic that leaves no room for love and hinders peace.”

“For those corrupted by love of riches, nothing exists beyond their own ego,” the Holy Father warned.

“The result of attachment to money is a sort of blindness. The rich man does not see the poor man who is starving, hurting, lying at his door.”

The end of the parable offers an additional lesson, the Pope continued. In the afterlife, the rich man calls out to Abraham from his place of torment. This is the first mention of the fact that he belongs to the people of God, for during his life, “his only God was himself.”

When the rich man asks Abraham to send Lazarus to warn his brothers, who are still living, Abraham responds, “They have Moses and the prophets, let them listen to them…If they will not listen either to Moses or to the prophets, they will not be convinced even if someone should rise from the dead.”

Thus, we ultimately see that the problem of the rich man is a “failure to heed God’s word,” Pope Francis said. “As a result, he no longer loved God and grew to despise his neighbor.”

As we start the journey of Lent, with its emphasis on fasting, prayer, and almsgiving, we have a chance at a new beginning in our own lives, the Pope noted.

“This season urgently calls us to conversion. Christians are asked to return to God with all their hearts, to refuse to settle for mediocrity and to grow in friendship with the Lord,” he said, adding that Christ waits for us patiently, ready to forgive us when we fall short.

“Let us pray for one another so that, by sharing in the victory of Christ, we may open our doors to the weak and poor,” he concluded. “Then we will be able to experience and share to the full the joy of Easter.”